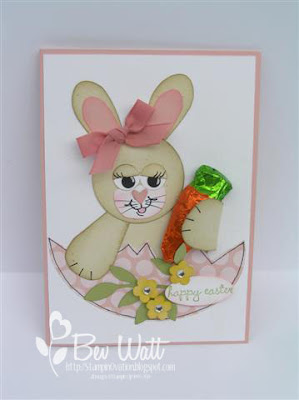 I wanted to make an Easter card for each of my three little grand daughters using these cute chocolate carrots I found at the shops...the punch art bunny was inspired by some Easter packaging on some other Easter goodies I bought... I have used 1 3/4 circle punch, small, large and wide ovals and 1/2 inch circles for the eyes...don't think the carrots will last long!
To make the bunny
The head is a 1 3/4 circle punch. To make the ears punch two large ovals and trim them so they are narrower at one end. Punch two small ovals in pink and trim  them so they are also narrower at one end. layer the pink ovals on the large ovals behind the top of the head. To make her arms punch two wide ovals. Trim a little off the bottom of each one and trim each side making it narrower one end. Add pen detail. Stick one of the arms behind the bottom of the head (wide end at bottom). Punch another wide oval for the body and stick it behind the head and the arm. Use a template to cut out an oval then use scissors to cut jagged edges across the ovals width. Place the punch art bunny behind the oval leaving his arm to hang over the sides. Use glue dots to attach the chocolate carrot (or a punch art one) then glue the second arm behind the carrot wrapping it around to the front and attaching with another glue dot. His muzzle was made using a one inch circle punch trimmed top and bottom, rounding the corners. I used a stamp for his mouth but you could draw that by hand. The nose is the heart from the Owl Punch. The eyes are 1/2 inch circles punched in white with 1/4 inch circles punched in black for the pupils. The eye lids are 1/2 inch circles punched in half. I have added lashes with black pen. The colours used are naturals Ivory for the bunny with Blushing Bride for the pink bits. Everything was inked before assembly. Clear as mud!
Posted by Bev at 16.4.11

If you have any inquiries regarding purchasing products, hosting a workshop or learning a little more about becoming a demonstrator please contact me and I will be happy to help
As a demonstrator you can work your own hours when it suits you, purchase your products at the demonstrator discount price and earn free products & cash bonuses for certain goals...so what are you waiting for??
email me at wotzup@bigpond.net.au
or call 0755748610 (warning teenager residing..this phoneline is often busy!)
or my mobile number is 0411176181

A bit about me

Hi , my name is Bev Watt and I live on the Gold Coast, Queensland Australia. I am happily married with three daughters and three VERY cute grand daughters. I have been a Stampin' Up demonstrator for just a short time but already I am totally smitten by their wonderful products and I won't be happy til I have one of everything!

Angels For The Forgotten 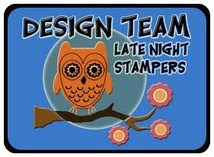 All stamp images © 1990-2010 Stampin' Up! All content, including text and photographs © Bev Watt. Please note that my projects are shared here on my blog for your personal enjoyment-feel free to case...what's mine is yours . If you are feeling generous mention my name if you copy one of my originals